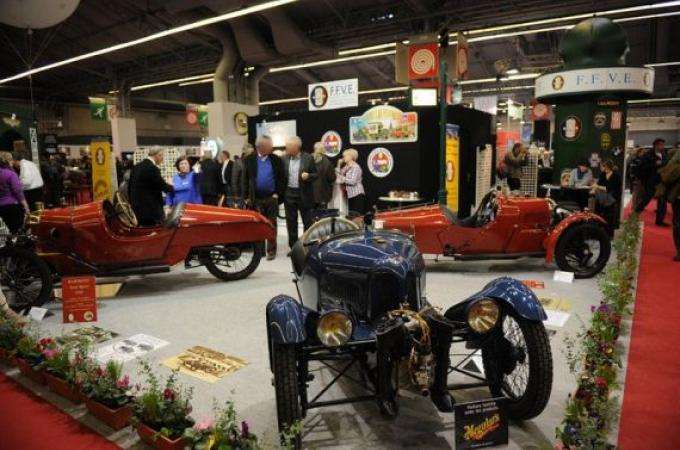 Published on 15 January 2014 in Fair and trade show

Retromobile Paris 2014 is the trade show that will be bringing together vintage car enthusiasts, collectors, dealers, restoration specialists and many more from Wednesday, February 5th to Sunday, February 9. Taking place in 44,000 square feet of floor space at the Porte de Versailles exhibition centre, this 38th edition of one of the world's premiere vintage car shows will see around 500 vehicles on display. At the Vice Versa Hotel we have a driving fondness for bold and extravagant design and so are happy to recommend this great event. [caption id="attachment_3821" align="aligncenter" width="570"]

This is the perfect opportunity to make connections in the world of vintage automobiles, with 100 enthusiasts' clubs represented, and around 400 exhibitors in attendance plus thousands of auto buffs from around the world. Additionally this year will see more special exhibitions than ever before. There will be a tribute to those early 20th century breakers of land speed records Malcolm Campbell and Thomas Parry, and several superb examples of the Alpine brand from the collection of the company's late founder, industry legend Jean Redele.

In the year which will mark the 100th anniversary of the outbreak of the Great War, a huge diorama will display some of the vehicles which were involved in that conflict. Additionally, there will be a light hearted but fascinating look back to the India of the 1920s and 1930s. This was when Maharajas vied with one another to see whose car was the most original and eye catching, by using startling shapes, amazing accessories and captivating colours. For the first time in Europe, fifteen of these grandiose autos will be shown, including the famous Swan Car of the Maharaja of Nabha, an ochre and black 1930 Delage 8, and Rolls Royce Phantoms which were used as tiger hunting cars.

After an enthralling day of attendance at Retromobile Paris 2014, there will be a warm welcome awaiting you at the Vice Versa Hotel, where you can recharge your batteries for another session.