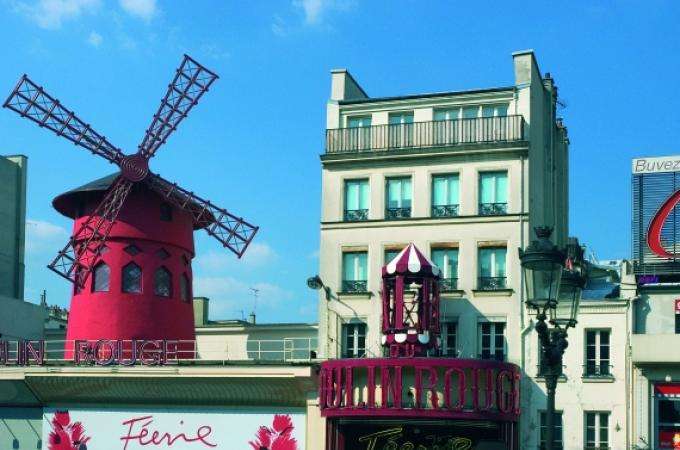 Published on 5 June 2013 in Entertainment

Cabaret music hall Paris is proud to present the exhilarating, spectacular show, Feerie. This dynamic Moulin Rouge presentation consists of magnificent performances, spanning across cultures, while journeying through space and time. The animated surroundings and quality services of the Vice Versa Hotel will prepare you for a night of enthralling entertainment, at the Moulin Rouge, which is easy to reach from the Porte de Versailles metro station. [caption id="attachment_1599" align="alignnone" width="570"]

Doris Haug and Ruggero Angeletti, both long standing Moulin Rouge directors, are the creators and choreographers of Feerie, the new season's show at the cabaret music hall Paris. This incredible show is presented through 5 main scenes, which include a breathtaking aquarium act and a circus styled performance, featuring acrobats and jugglers. The entire Feerie troupe consists of 80 artists and 60 Doriss Girls, who shimmer, shake and shine, thrilling audiences with the unique brand of upscale, glamour and elegance that make Moulin Rouge shows enticingly visual and exciting musical extravaganzas.

Feerie runs every evening and if you book your tickets for the 21, 22 and 23 of June 2013 (*), you'll receive a Moulin Rouge book, as a special gift and token in celebration of the summer season. The cabaret music hall Paris "Le Moulin Rouge" has had a huge number of exceptional and iconic stars, from Edith Piaf to Elton John, grace its stage. The cabaret music hall was built in 1889, which is also the same year that the Eiffel Tower was completed. A few years later, in 1895, the French experienced the Lumiere brothers cinematographic presentation, viewing moving images on screen for the first time. This was clearly a wonderfully creative period in French history.

The Vice Versa Hotel is stylish and all thirty seven rooms are themed around the 7 deadly sins. Catch the metro to Pigalle and walk 6 minutes to the Moulin Rouge, located at 82 Boulevard de Clichy, very close to Montmartre and 36 minutes away from the Vice Versa Hotel.