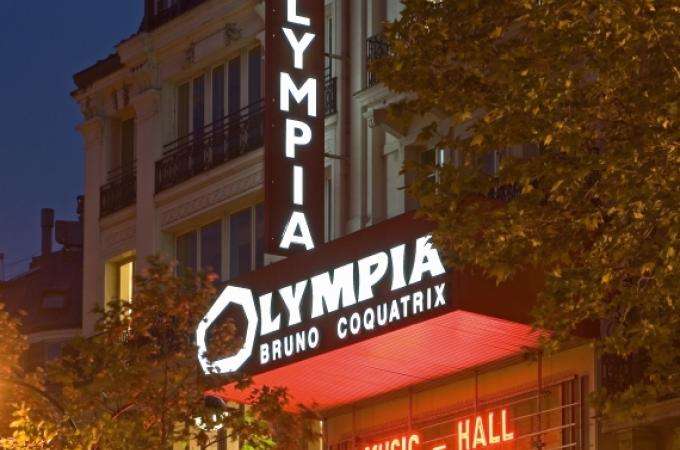 Olympia Paris , one of the World's Greatest Concert Venues

Published on 15 May 2013 in Entertainment

Olympia Paris is a legendary concert hall with an enviably lustrous heritage. This centrepiece of Parisian entertainment and popular culture has hosted a galaxy of stars from Edith Piaf, Marlene Dietrich and Charles Aznavour to James Brown, Kiss and Tina Turner and experienced a fascinatingly chequered history. Here where the red curtain rises 320 nights a year you can experience a night to remember in the unique atmosphere of the city's oldest music hall, easily accessible by all modes of transport from the Vice Versa Hotel. [caption id="attachment_1559" align="aligncenter" width="570"]

The site of the contemporary concert hall Olympia Paris has been founded in 1888 as Montagnes Russes by entrepreneur Joseph Oller, creator of the renowned Moulin Rouge. The theatre was renamed the Olympia in 1893. A steady decline during the early twentieth century saw it become a cinema from 1929 to 1944. After liberation it became once again a music hall, with free entrance for uniformed Allied troops.

Bruno Coquatrix gave it a renewed lease of life in the early 1950s by inviting the greats of the entertainment world to perform. In 1993 the French Ministry of Culture issued a preservation order on the venerable building. After two years of restoration and refurbishment, the famous facade with its distinctive glowing red lettering and plush red interior, have been returned to their former glory.

At the Vice Versa Hotel we offer you convenient access to the Olympia Paris , located on the Boulevard des Capucines near the Opera Garnier, less than five kilometres away across the Seine. Here the emphasis is on style and comfort.

Our decor has been designed to the smallest detail by the renowned Chantal Thomass on the theme of the seven deadly sins, making the Vice Versa Hotel one of the most innovative, quirky and unique in Paris. Our friendly and hospitable staff will help you to enjoy your stay in our sensuously comfortable, outstandingly detailed and simply unforgettable surroundings.